The Gasser Foundation took a technological leap forward when a ten month process of planning, design, engineering and construction resulted in the addition of 630 solar panels to the Gasser building. The new solar electric system, combinded with new energy conservation measures, will now offset between 90% to 100% of the electrical needs required for all of the building’s tenants.

This truly was a team effort. Gasser President Joe Peatman and Vice President Henry Gundling’s first step was to bring on board Gopal Shanker of Recolte Energy. Gopal is a Napa-based renewable energy consultant who serves his clients’ needs by managing the fairly complex process of bringing solar energy to an existing building, and, in many cases, finding funding sources for the venture.

Next to join the team was Bob Massaro of Healthy Buildings. Bob and his company helped Gasser in several ways. First, they completed an extensive sustainability audit on the building. This identified several key areas of the building that could be upgraded or retrofitted to lower the building’s energy consumption. Gasser went ahead and implemented these changes which resulted in a significant reduction in the building’s combined PG&E bills, and, even more important, decreased the size of the solar array needed to power the building. It has been estimated that Gasser’s $135,000 investment in energy conservation measures lowered the size and cost of the necessary solar array by almost $1,000,000; quite a return on Gasser’s investment. 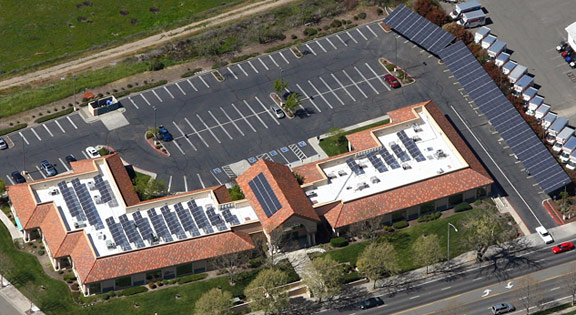 With the energy improvements now in place the Gasser team then went about the process of selecting photovoltaic (solar panel) contractors. Gopal drafted an excellent Request for Proposal that generated a response from eleven qualified solar contractors. After a three phase review process, Borrego Solar of San Diego was awarded the contract.

The next step was to find a suitable location for the panels, a location that would allow for the existing air conditioning equipment on the roof to remain in place, work around the 5 foot tall parapet wall surrounding the building’s roof, and in the case of the parking lot, maintain the view to the Western hills for all of the tenants. Healthy Buildings solved this problem by designing an elevated supported structure on the roof to support 252 panels, and a unique single-post carport system along the property’s north side to support 378 panels.

With the system size, location, and cost established, funding totaling over $1.5 million had to be secured. Through Borrego Solar, Gasser then had the benefit of meeting and establishing a working relationship with Michael Johnson of the National Development Council. NDC has a long and successful history of providing funding for affordable housing projects and has now expanded into renewable energy. Michael was able to craft a very creative funding model that brought to Gasser the funding it needed for the new solar panel and support structures, yet maintained the payments at the same level as the building’s pre-solar panel PG&E bill. The Gasser Foundation was eager to become the first organization to use this innovative and attractive funding model and establish its validity.

In December of 2008, Gasser’s new solar array went online and will provide tenants with clean electric power for decades to come.